What would Dad do?

I recently found a copy of Edward S. Curtis “Visions of the First Americans” at Barnes and Noble for 4 bucks! My father had a similar collection of these photos that really grabbed his interest so I couldn’t pass up the opportunity. You see, my dad was an accountant who painted in his free time. He didn’t have a whole lot of free time, he worked his butt off until pretty late and then had to commute back home from New York or, San Francisco in the late 70s. He really enjoyed painting and would sit in the kitchen working on a painting of a photo from the National Geographic that he’d found or, later, after acquiring the Curtis book, on a photo from there. He was damned good too. He never sold a painting and only showed once that I can remember. I think he won. The thing is, he didn’t feel that the paintings were “his” since he’d worked from a photo. It’s a shame, it would have done his heart good to hear the compliments he would have received.

So, I jumped at the chance to grab the book and take it home to work on some drawings based on the photos. It’s a change of pace for me to actually sit down and draw for the sheer fun of it. I guess I’m fantasizing about what it would be like to sit around with dad and do some art with him. We never did that. I was a hot-headed idiot in High School and, after the Marines, and while attending college,  I was more interested in collage than painting or drawing. So, even though I was living at home at the time, I never stopped to sit down with dad and do art. It was off to school, and then to work at the pizza place. 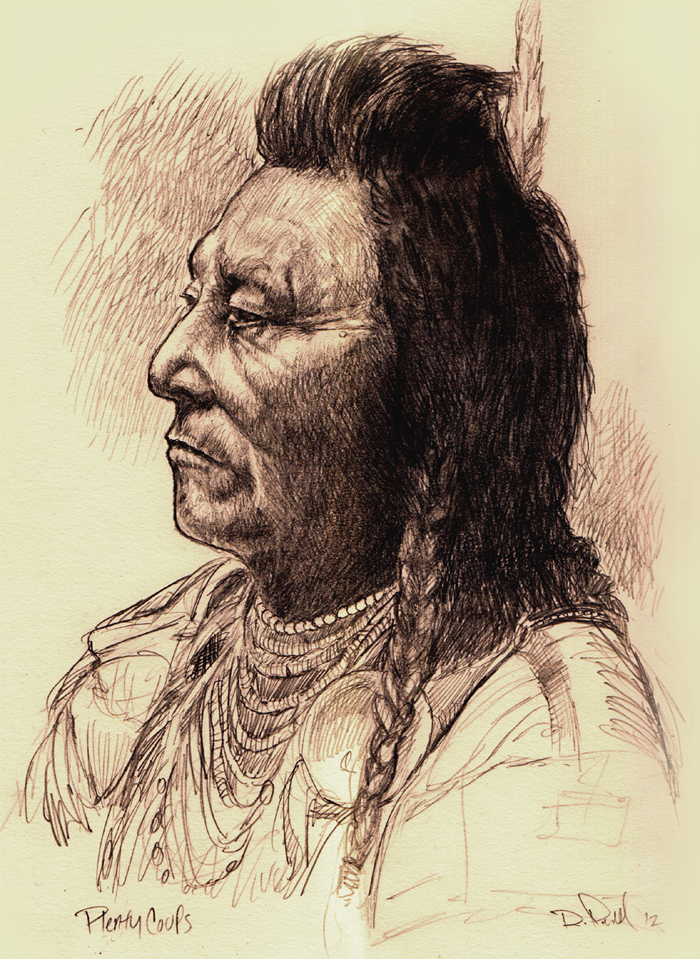 Here’s a drawing of Plenty Coups, a Crow c.1908. I’m not much of a painter but I do love to draw. This was done on a Strathmore 9×12 medium pad. I used my standard mechanical pencil: a twist-erase 0.5. (I saw that Sergio Aragones had the same pencil while touring SCAD with him so I’m sticking with mine!) I tried some powdered graphite for the hair but that ended up too dark for my taste. I like a textured drawing with a lot of lines in it as opposed to a smooth shaded look. My daughter was quick to point out that she liked that as well, so I’ll stick with that too.

Maybe we’ll hang out and draw sometime. I’ll tell her stories about dad.