Well, I’m back at at the pirates once again. I’ve got big plans for the little guys and all shall be revealed soon. I’ve not bored you with more concept work as it all started to look very similar and I think I exhausted the subject pretty well.

Today I’m starting on a new t-shirt design featuring Blackbeard himself. I visited some shops around Beaufort and found a cool Blackbeard shirt was a rare thing. He Headquartered out of Beaufort in what was known as the White House and is now called the Hammock House (hammock in this sense describes a rise in the land). Below are some exerpts from the blackbeardthepirate site:

“There are many legends and stories connected with the house. Some people have believed it to be haunted and it is told that Blackbeard stayed here for a while with an 18 year old French common-law wife who was not a willing occupant. The pirate got so angry with her that he hanged her on an oak tree in the back yard when he departed.

Another tale frequently told has to do with one Richard Russell, Jr., who, upon his return from a sea voyage decided to take a slave up into the Hammock House attic to punish him. The slave overpowered Russell and pushed him down the stairs, breaking his neck..

Another story has it that a British Navy Captain, engaged to a Beaufort women, upon arriving in town mistakenly thought that his fiancee has been untrue and killed her alleged lover in the upper area of the house; traces of the victim’s blood can be detected on the treads of the steps.

During the Civil War Union officers were quartered in the house. Three of them set out for the building and were never seen again. In 1915 workmen digging near the back porch found their remains. Recently, during renovations, a human scapula bone was uncovered.”

So, I thought I’d go for “creepy/evil” with the shirt. I’m currently in the pencil stage but envision the thing to sit horizontally on the shirt with smoke billowing 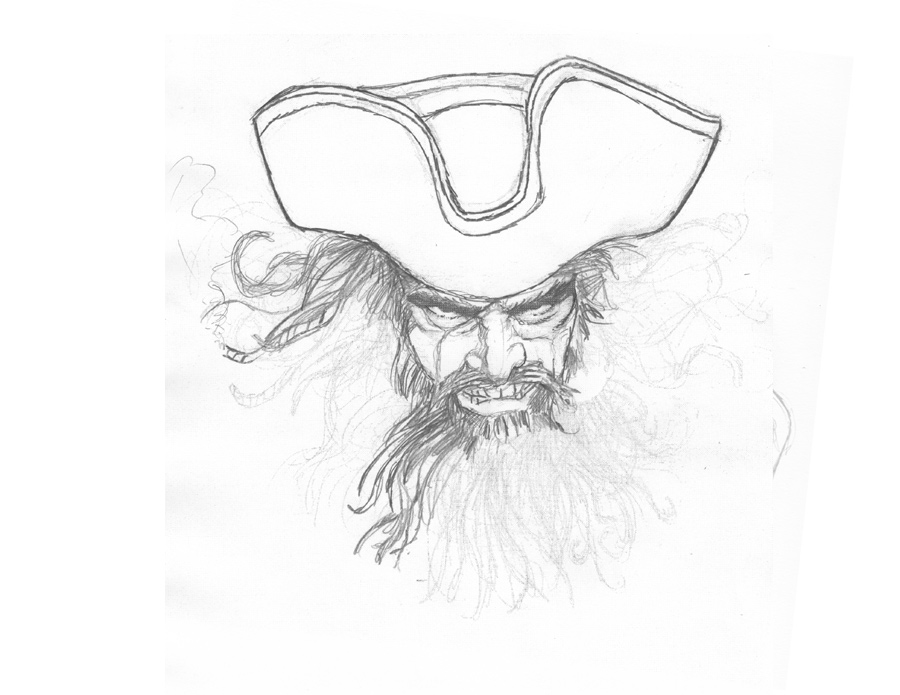 from fuses under his hat and his hair reaching like tenticles outward from his face. I was having a tricky time with the eyes. No matter what I did, he looked cross-eyed and silly. Eventually, I shot my own reference photo for them.

I guess that makes my eyes the eyes of a killer now!

Stay tuned  and I’ll update on my progress!