I wish I had something a bit more unique to post here but I’m still knee-deep in concepts and haven’t had a lot of time for other projects (other than my wife’s graduation party and my daughter’s prom!) So let’s look a little closer at the process of building one of these concepts, going into a bit more detail on using Photoshop to make my life easier.

Once again, at the beginning I’m given a thumbnail and a few pages describing the elements necessary for gameplay accompanied by some reference photos that the designer and creative director include to show a rough idea of what they’re picturing in their head 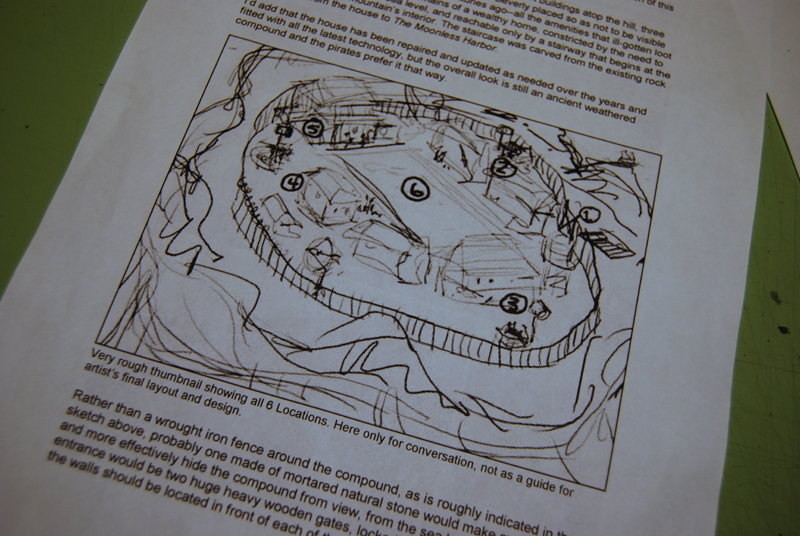 From there I make a very rough sketch, laying out the objects.

Many things change in the initial thumb by way of text following the thumb or through some e-mail discussions. For example the “fence” in the thumbnail needs to become a wall of rock topped with razor wire. 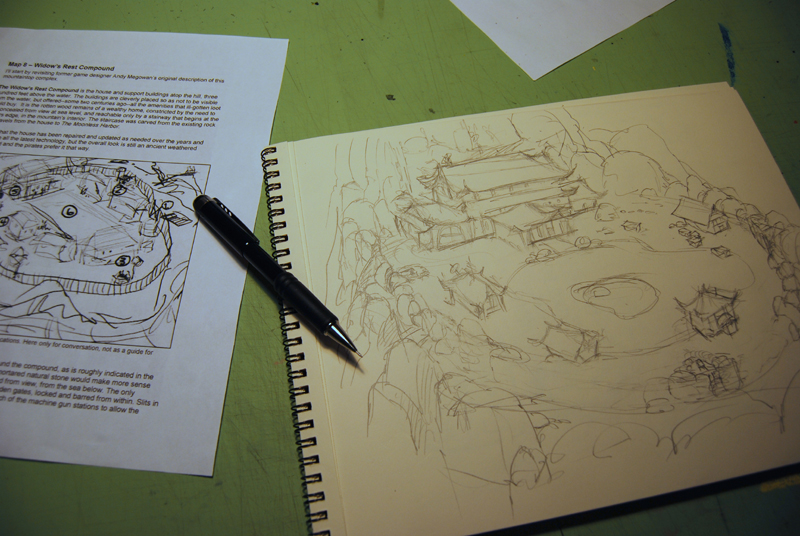 All of this needed to be hidden by upthrusting rocks so the fortress could not be seen from the ocean below.

I’ve got the necessary buildings in this sketch and the general idea of the rocks. The rock wall hinted at in this sketch was a very natural looking wall (adding to the camouflage) but it was agreen that this would be to easy for the characters to scale. 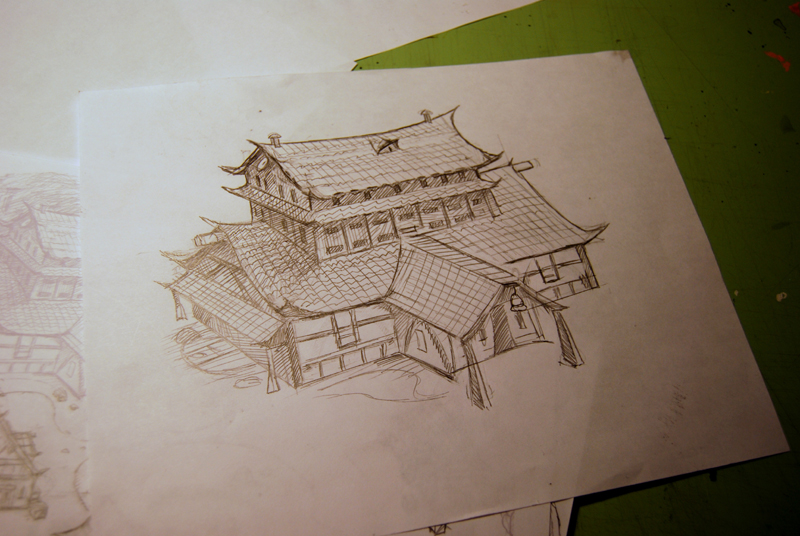 My biggest concern for these “Chinese pirate” concepts is getting a believable look to the buildings. The perspective we use on these things is tough enough without the addition of these curling roof-lines! I usually use cheap copy paper to draw these elements on. I’m a cheapskate.

When I was happy with the main house, I decided to knock out the wall based on the perspective used on the house. 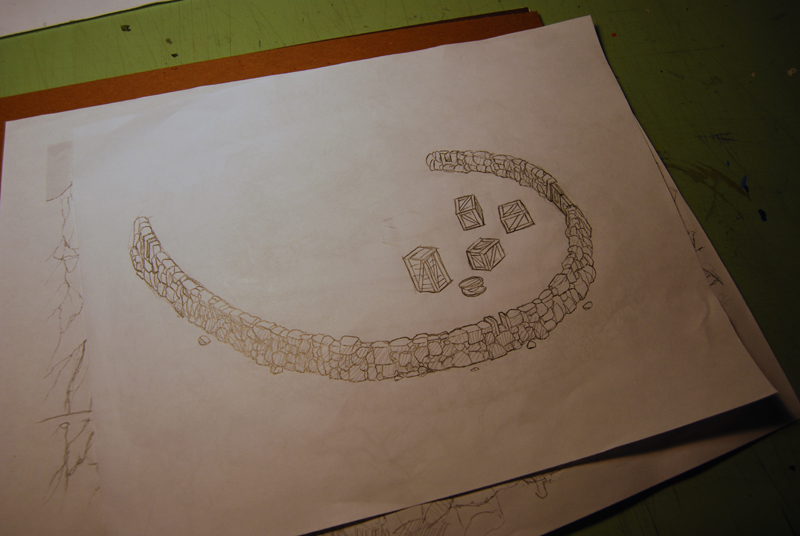 I knew I’d need some boxes in the courtyard so I threw a few of them in while I could see the perspective (these will be scanned at the same time and shrunk down on their own layer in Photoshop. Building these things in Photoshop with each element on a different layer (Photoshop layers are like stacked sheets of clear mylar) allows me to easily juggle stuff around.

Now, for the sneaky part… what I do next is arrange the elements (the house and wall) on the page in P-shop and do a nice high res print on my laser printer. 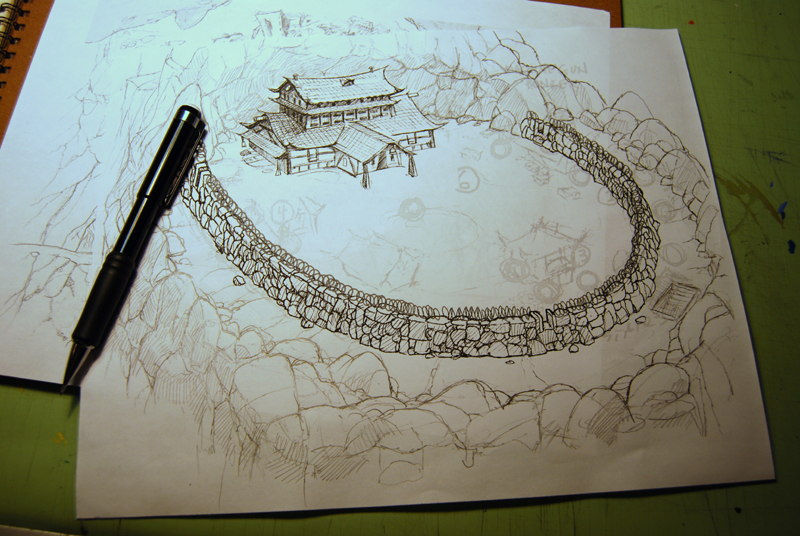 Being a cheapskate, I can simply draw the next element on this! Here you can see the rocks drawn on the printed house and wall with the initial thumbnail ghosted below that! Whn I scan this in, I’ll erase all the initially printed parts and isolate the rocks themselves and add them to the whole composition. The printed elements must be removed because upon close inspection, you can see all the tiny dots they’re made up of. 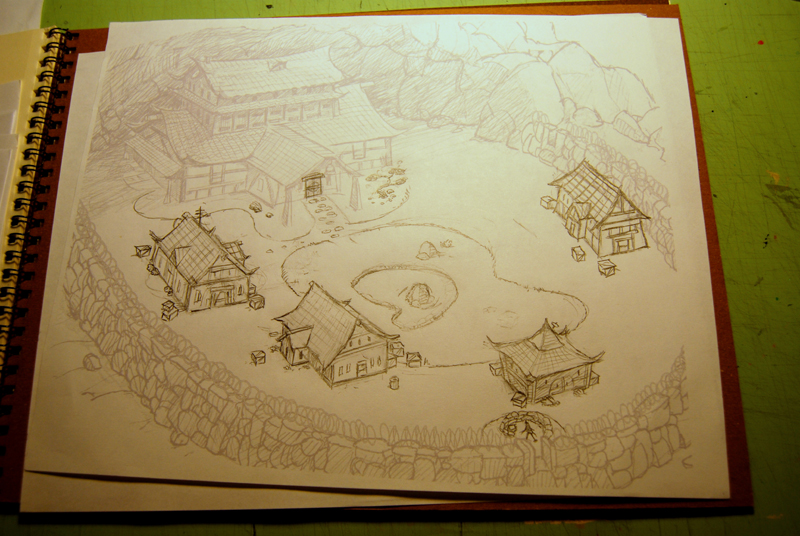 Now, I do the whole thing over again, adding the huts, grass, pond and a redone door to the mansion. You can see that I only printed the area needed to fit the huts. That way, I can blow that area up and draw the huts slightly larger and shrink them down in Pshop, hiding all the imperfections!

At this point, I’m ready to add additional elements such as searchlights, a water tower, machine gun bunkers, the aforementioned crates and anything else. These are easy enough to figure out the perspective for that I don’t need to do the reprint step. I can also tweak them in Pshop. 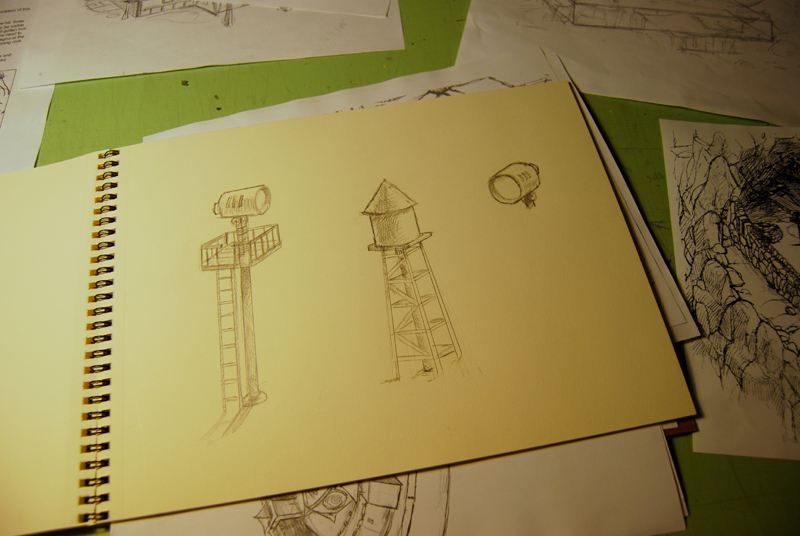 You can see I only drew 2 heads for the searchlights. That way, I can flip the stand and the heads to make 4 separate lights.

From this point forward it’s just a matter of juggling the elements, and  doing stuff like copying and flipping crates to make a bunch of unique ones.

After this, I’ll add some rough shading to give the thing some depth and then it’s off to the painters!