I end up in the Zoo

Mom always said I’d wind up in the zoo. Here in Asheboro we have one of the best zoological parks in the world : the North Carolina Zoo. A huge park, it occupies over 2000 acres and includes the North American and African continents with plans to expand with an Asia section as well. The polar bear exhibit was my favorite for years but I think the North American streamside exhibit is beginning to win out as time goes by.

The zoo has more than animal exhibits nowadays. They need to keep the traffic coming to fund the whole operation so they offer special programs and sections to draw folks who may think twice about seeing “boring” animals, a sad fact but a necessary one. Recently they updated the KidZone with an awesome bent wood sculpture/entrance by artist Patrick Dougherty. It’s a huge thing that blows your mind from any angle as you walk under and through it. Once inside, they’ve got a stream the kids can tramp through, an elevated bridge, a Stonehenge-like maze, learning centers, interactive programs and more. 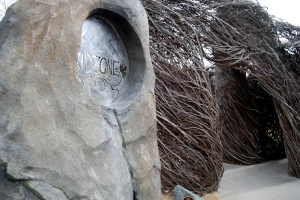 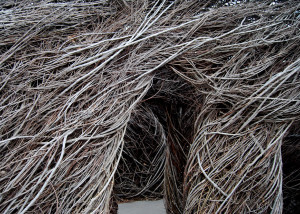 The kids loved it during an opening ceremony a couple of weeks back. It’s the 40th anniversary of the zoo and they’re celebrating with all sorts of programs like this.

One of which, I got to have a part in: BUGS! An EPIC Adventure 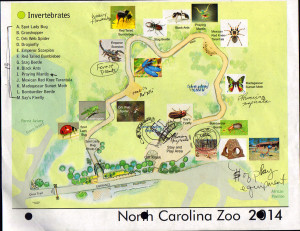 The exhibit layout on paper

‎Graphics Supervisor Diane Villa called me up a while back and told me about the special exhibit that was coming to the zoo Featuring 13 giant, animatronic bugs, a learning center containing actual bugs and a gift shop. Diane recruited me to design a logo and a character for each bug to made it seem a little less scary (picture a 30-foot Tarantula) and appropriate for advertising, coloring books, products etc. I was given a tour of the area (at the time it housed animatronic dinosaurs) and a package of ideas.

It’s tough when I have an assignment that requires me to make things a little more palatable for a venerable institution, it’s also difficult to design them in vector for the many uses a client may have. In vector form, art can be scaled up without any image loss. Unfortunately, it makes it hard to give the art the pencil/ink/watercolor feel that I love to work in. My characters typically have a certain “grossness” to them as well (thank you MAD!) so I had to work pull back there AND one last thing: They had to accurately portray the bugs. It is a Zoo, after all.  I began doing very quick sketches while at the meeting, talking to Diane and Dr. Adrian Fowler (one of the zoo’s mammal curators..among other things). These folks are passionate about the zoo and often stretch themselves thin between many projects that benefit the organization. So, here was a mammal guy working on an invertebrate project. We had a lot of laughs of course  and then I was set free to go back to the studio to see what I could come up with!

Here’s a couple pages of my notes: 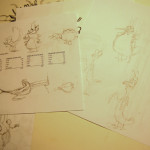 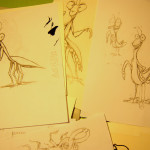 My first finished character was the Stag Beetle. I was checking to see how far I could push it by adding teeth and a tongue to the character and was pleased that they OK’d it. 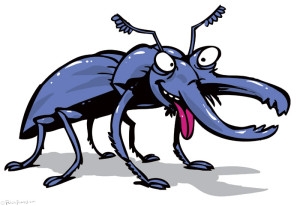 But it was decided that the Mantis would be the spokesperson for the bugs so I was to develop him first and to make him very friendly and not too crazy. I also based him on the type of Praying Mantis you’re used to and not the alien-looking Devil’s Flower Mantis on exhibit (very creepy!).  The process of coming up with the mantis was the toughest. He had to look just right in the Zoo’s eyes and the finished art needed to be jointed so they could easily re-pose him. It took a few tries but we finally got him to the finish-line. Here’s a slideshow of the development of “Pierre” the Mantis: 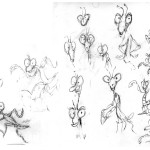 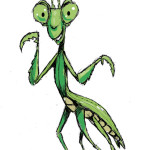 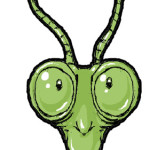 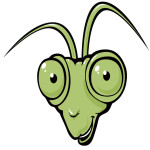 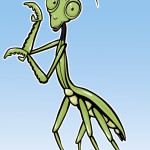 Now that we had Pierre nailed down, they zoo decided they’d like to see the logo. At this point, we had two examples of bugs to use as direction: one very tame and the other in the extreme they were willing to go, so they felt assured that the others would go smoothly. With a logo in place, they could start advertising. This whole process went very smoothly. Here’s (basically) the process in a nutshell:

As you can see…Pierre won out again! Such is life. Now it was simply a matter of knocking out the rest of the bugs.  Here are a couple of favorites 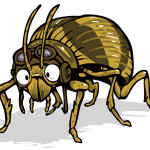 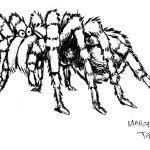 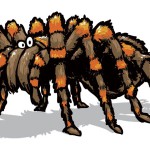 To give you an idea of what I mean by using Vector art, here’s a screenshot of my Tarantula during the coloring phase in Adobe Illustrator: 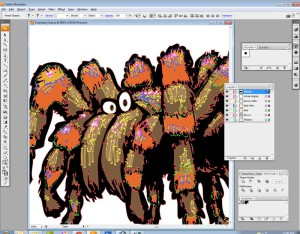 And this is the group!