Had a great time last night playing trivia with my pals down at Lumina and we stomped some useless-knowledge butt! I was basking in the sheer glory of having my beers paid for by my 14.00 in winnings when I arrived home to find a pickup truck in my front yard. I live on a dead-end (that’s cul de sac for you hoity-toity types) and apparently this guy saw a magic road continuing on into the woods, because he followed it. Good thing my dogwood tree reminded him that the pavement ended about 15 yards ago.

Anyway, there was nobody there so I ran into the house to ask Frankie if she was okay and what had happened. Apparently she hadn’t heard a thing and had just noticed some lights in the road.  Well, I called the cops and as I was waiting for them to show up, a small hatchback appeared and started trying to tow the truck out off of my rock wall. I went out and told them to please stop digging the rear tires deeper into my lawn or I’d have to beat them to death with the remnants of my dogwood tree, to which they graciously complied.

The cops showed up and gave the poor, frightened kid a breathalyzer, etc. While I talked to his uncle (the driver of the hatchback). The kid was probably on the damned phone when he reached the end of the road and kept going. He was shook up, the uncle was very apologetic. Promises were made to repair the damage and all was cool. Kind words and patience pay off in small town life. They’ll be by today to remove the truck and patch things up.

The cops were fans of my cartoon “Dixie Drive” and we had some laughs about “new material” showing up at my front door. *sigh* 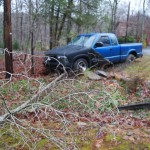 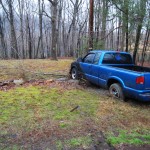 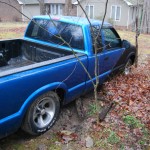 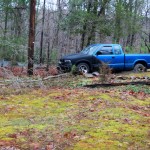