While I was visiting friends on Harker’s Island, NC. last weekend, my lovely wife Frankie and that beautiful daughter of mine, Bailey took advantage of the fact that my friends sell their stained glass  on the lawn in front of their home underneath beautiful oaks draped with Spanish moss. Frankie and Bailey placed a couple of their paintings out there along with some backpacks that Frankie had sewn hoping to make a sale or two. Things were going pretty slowly and we were visiting on the front porch when a car pulled up and a guy approached. Apparently this guy had recently started a business in Atlantic Beach in which he runs tours of the surrounding area from a newly upgraded building with….a gallery space! We all went and checked the space out and sure enough, it looked pretty nice. As good a place as any to get our feet in the door of the Atlantic Beach market!

Richard and Beth have plenty of beach-themed stuff so this wouldn’t be a problem for them but Frankie, Bailey and I don’t have much in that area. This was a problem living back near Yosemite, we never had the right art for the market. Folks would be looking for pine trees and waterfalls and I was painting spaceships and rayguns! I’m not going to make that mistake twice.

So, as soon as I got back I started working on some ideas. I’m thinking Pirates and Fish. Richard had some great advice in the pirate camp but I had an idea pop into my head immediately regarding the fish. Fish are such interesting creatures, almost like alien beings and, to tell the truth, some look sorta space-shippy too! Right up my alley.

I’ve always loved those old scientific specimen prints of flora and fauna. Like the Audubon birds. Many of the really old ones were really wacked out too, getting the animals wrong in a big way. I like these the best. I can imagine that many were drawn up on description alone or perhaps their specimen arrived back at the lab in Europe following a long sea voyage pretty well mangled.

“Dump out the pickle jar and let’s see what ya got!” 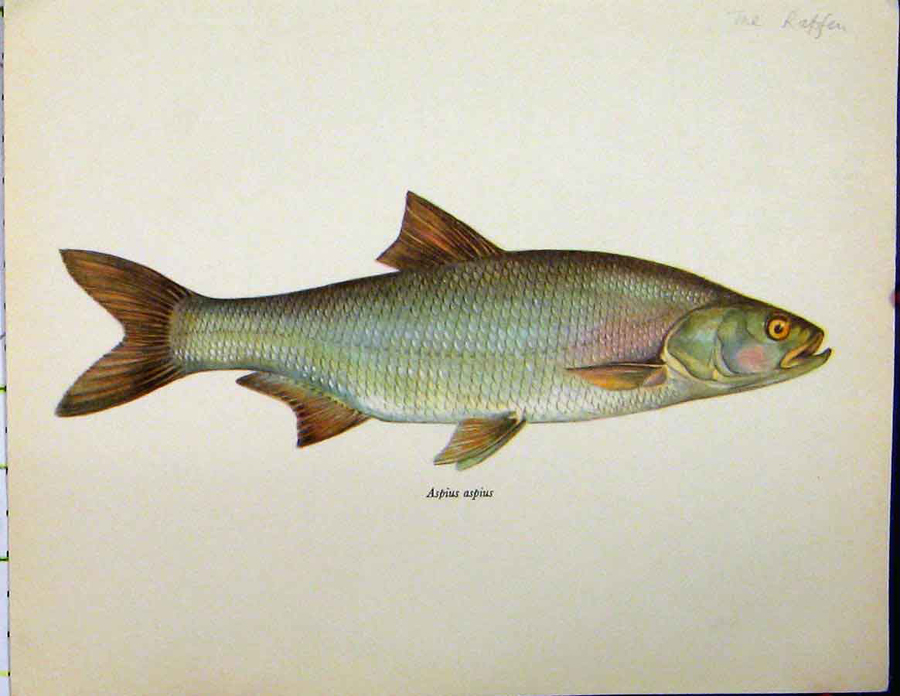 I also like the way that the typical fish print basically isolates the animal as if it was lying on a plate or something. This allowed the spectacular color patterns and fin arrays to really shine.

So, this would be my idea. I’ll do scientific prints of my own fish. I’ll base many of the characteristics on actual species but just enough to make it look believable from a distance and accompany the thing with a humorous name and Latin classification. 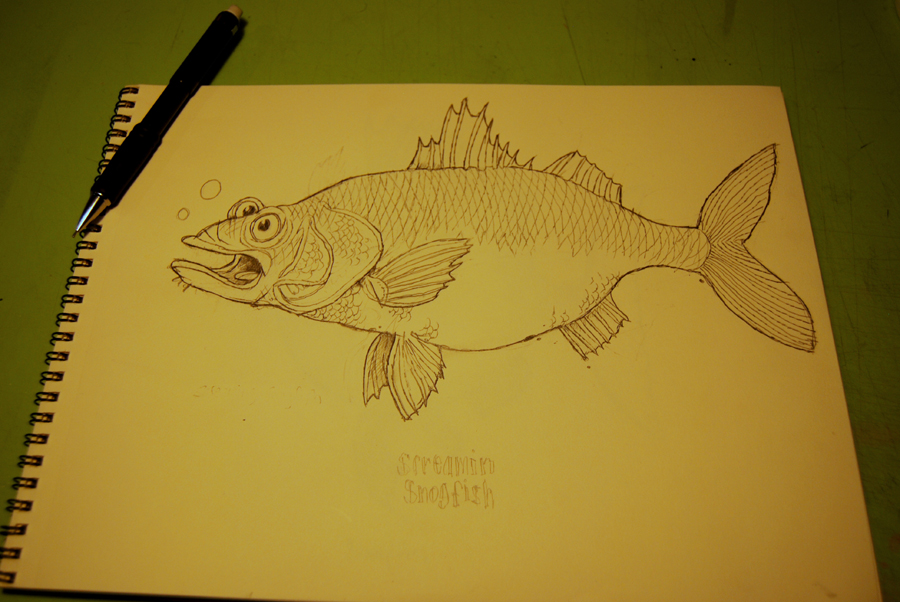 Initially I’ll do the sketch in pencil using my mechanical pencil with a nice HB lead in it and then I’ll scan the image in, add a nice font for the name and Latin classification and then print that out on a piece of watercolor paper, just ghosting in the fish so I can finish that off with ink before I paint it with watercolors.

Often, I’ll do the color first and then go back and ink over the drawing. This makes the blacks really pop. On the other hand, I may ink first but then I always need to go back and pop some blacks here and there  to make me happy. 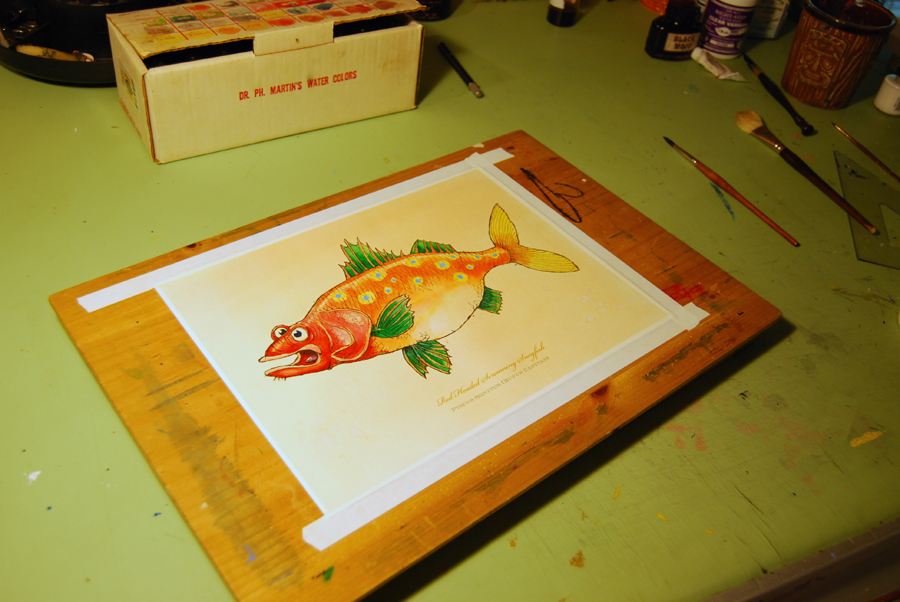 their color and the ability to get nice flat areas down makes it worth it to me. Art is a fleeting and temporal thang.

I first layed down a wash of sepia (thanks to Frankie’s suggestion!) to achieve the  aged paper that many of the prints I’ve seen are printed on and began my colors over that. My main concern was that I’d lose the bright blue I’d chosen for spots  as I layed it over the sepia but decided I’d first out down a spot of bleed-proof white underneath first.  Worked!

Once the whole thing was finished it was back to Frankie for any more bright ideas (she’s usually got one) and sure enough, she came up with an 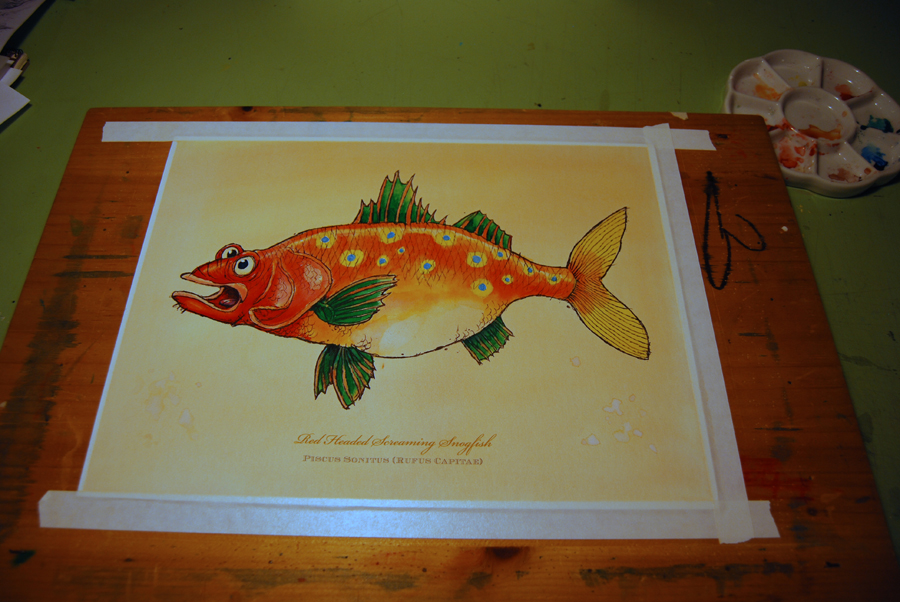 idea to add some stain marks to the surrounding paper. I really like what that adds to the image.

So, I’m looking at about a one hour drawing and a two hour painting time altogether. I should be able to get about three finished by mid June and off to Harker’s Island. I wish I wasn’t squeezing these things in between my freelance conceptual work and could concentrate on knocking them out all at once! They’re really fun to do. 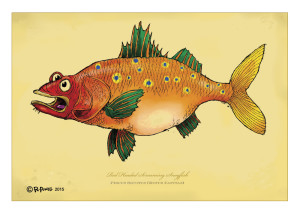