I’ve just opened a shop on ETSY! You can visit the shop by simply clicking “Shop” in the top menu of this blog. The wonderful thing about Etsy is it enables me to sell my art at very affordable prices, about half of what I’d charge in a gallery. Galleries typically take 40-50% of sales so, it clears me of that obligation. So go out there and grab some art! Fill those barren walls with color and fun.

Today, I’m going to post one of my favorite “toy” prints, “Ground Zero” which revolves around the magic fairy circle somewhere off in the woods where my lost toys ended up. When I was a kid, I got a Major Matt Mason “Captain Lazer” action figure for Christmas that really blew me away. 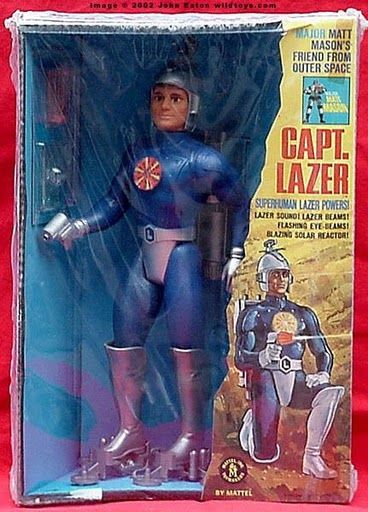 He shot beams of light from his eyes, had a multicolored spinning light on his chest, carried a cool raygun and was HUGE. Very, very cool.
This is where it gets foggy… somehow I lost him in the woods. I can’t remember why I believe that but I spent the next few years occasionally bushwacking in the woods behind our house hoping to find him there. Never did. Maybe my brother snatched him and blew him up (like he did my Captain Action!). Anyway, I believe there’s a place, somewhere off in the woods where all my superballs, GI Joes, Green Army men and other great toys are residing. Ground Zero.

My toy prints usually have themes such as this, I like to inject some sort of mystical lore into the artwork highlighting what I feel is a magical power toys hold. Unfortunately I don’t own all the toys I’d like to turn into artwork but LUCKILY, we have an amazing antique mall in town, managed by my friend Jack that has an enormous collection.
The Buck Rogers 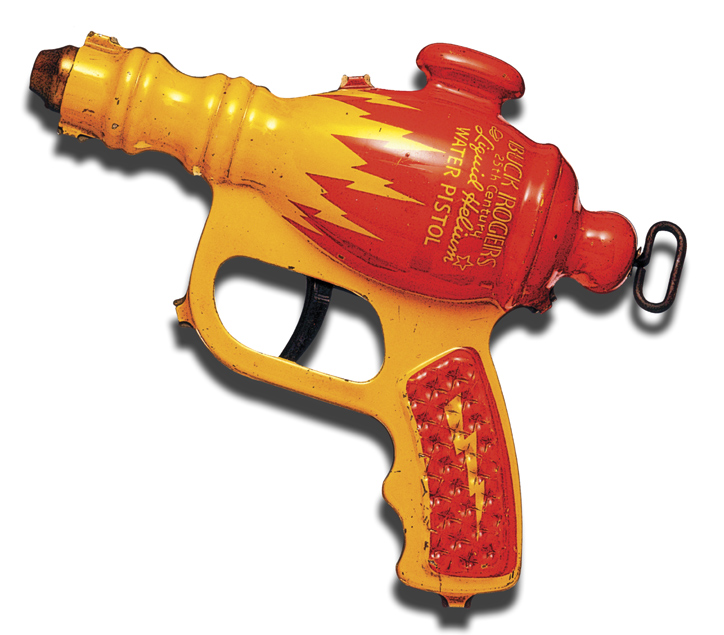 The Buck Rogers Liquid Helium Water Pistol is one of the coolest toy designs ever. Hands down. I decided this would be my centerpiece.

Once I had an image of that, I went around collecting photos of other toys that struck a chord in me, a tin-toy duck owned by an old instructor, Lew Carson would fit nicely in the wooded scene. A Godzilla head, army men..a pencil (what kid doesn’t love to draw?). 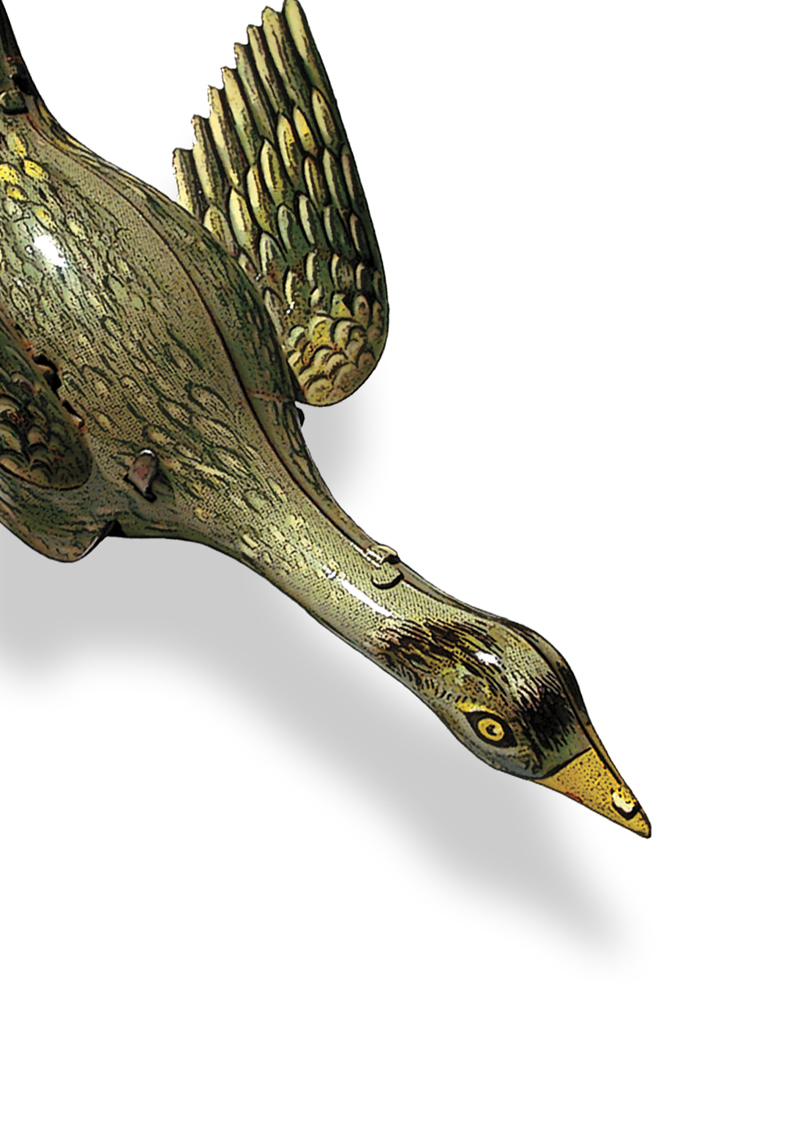 I collected a whole bunch of photos. I didn’t use them all but, I’d have them for reference later.

Next, out to the woods to gather leaves and sticks and make a nice composition.

From there, it was into the studio and into Photoshop where the compositing began. Layers upon layers of leaves, sticks, toys and shadows were slowly built up and incorporated into the artwork. Colors were manipulated and flaws removed until I was happy with the print. THis was a big one, so the computer was really humming away, keeping up with all the info.

Next, I needed to work out where I’d add the Gold Leafing. One of the elements I like to add to my prints to set them apart from a standard 2-dimensional print is gold or silver leafing. 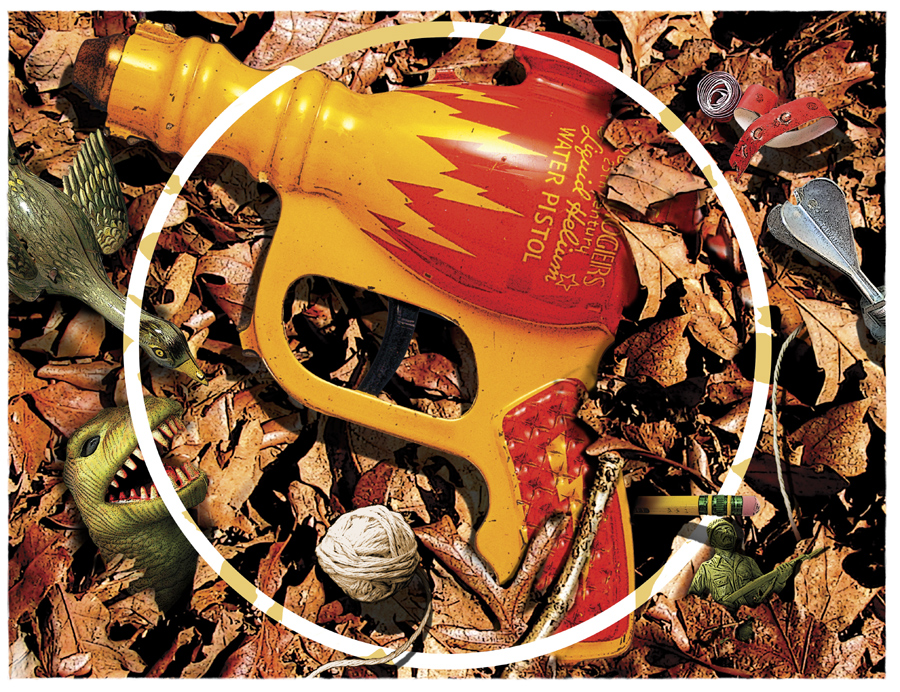 It really adds a cool dimension to the work. When the light catches it just right, it’s like a secret has been revealed.

The circle on Ground Zero is almost invisible until the light hits it. In this shot, you can see the guide I used. The “golden areas of the circle are the only areas that actually remain on the piece. The gold leafing peeks out here and there from under the leaves.

I apply the leafing using a brush with glue, which dries tacky. The extremely thin page of leafing is floated down carefully on the glue, burnished and then brushed away. It’s a nerve wracking job. The leafing is so thin and delicate that you need to hold your breath when applying it or Whoosh! it’s over the drawing table and gone! 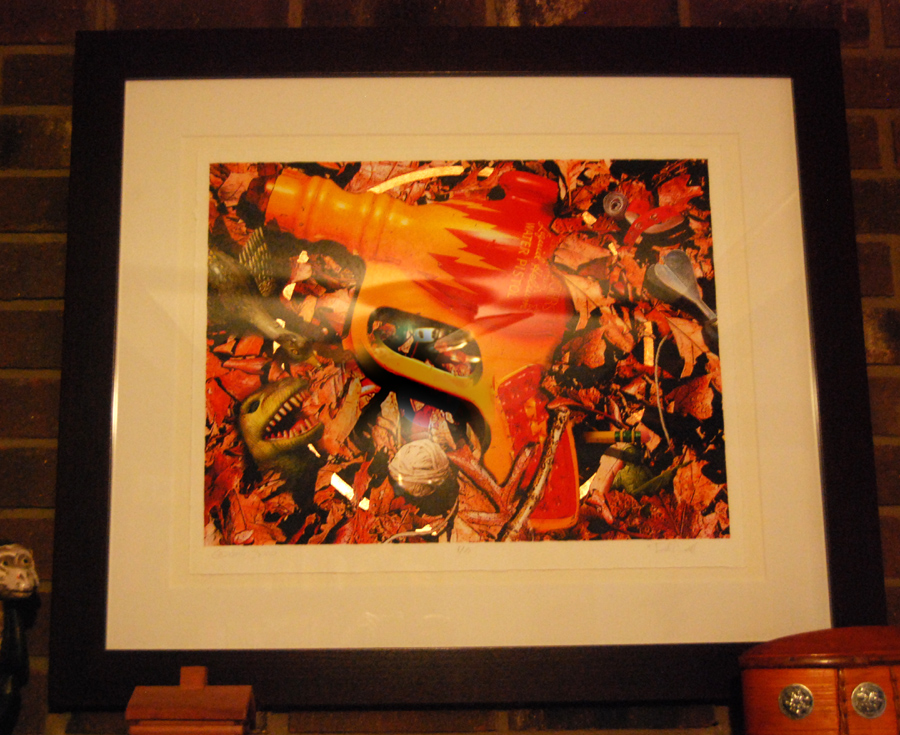 Here’s a shot of the work that somewhat reveals the leafing. It’s hard to photograph!

So, that’s it folks. If you’d like to own this piece of artwork, you can travel over to my Etsy site and pick one up. Get it soon though…there’s only 4 left!!