Hi Folks. This year the artwork I did for my wildlife collection was nominated for Best Product/Advertising Illustration at the National Cartoonist’s Society’s Reuben Awards.

Below is a short travelogue of the whole experience. Enjoy! 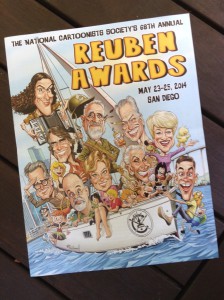 It’s now a week since I flew home from San Diego, tired, elated and sporting an enlarged and cracked, aching liver (cartoonists can drink!). I’ve done a bunch of Facebook postings, but some of my friends don’t do the Facebook thing (gasp!) and have been curious about the whole event. Here we go….
I had an early flight out of Greensboro so I was up before the crack of dawn 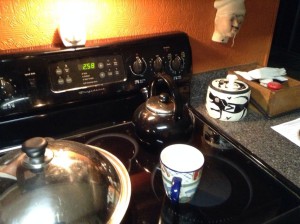 My fellow passengers and I actually arrived at the airport before the TSA agents, so we had to sit and wait for them to get to their stations before we could drag our weary butts to the gate. We flew to Charlotte, I hopped on another plane and flew US airways to San Diego. This airline is about as no-frills as you can get. Awful. Complaining ….over.

I got to San Diego around 9:45 in the morning so there wasn’t a whole lot to do. I checked in, took a nap and then went out to explore. The Omni hotel is located down near the historic Gaslamp District in San Diego.This section of the city has all been refurbished and is pretty nice. Nothing like I remember it from the early 80s when I visited as a marine. It also sits right next to the Padres Stadium and actually has a bridge going from the hotel to the stadium. Pretty cool. I went down Fifth Avenue and found a place where I could sit and have lunch and a beer. 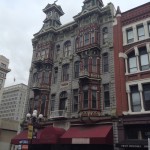 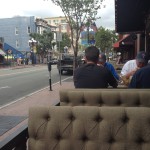 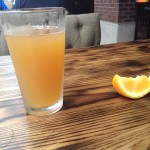 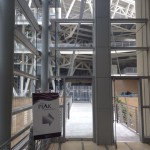 I wandered around for a while, went back to the hotel hung out and watched the cartoonists begin to arrive. I recognized some friends and by 6 o’clock we were in the bar having a drink. By 7 o’clock I was falling asleep so I went to bed!

Friday morning everyone gathered in the lobby and lined up to pick up name tags  and goodie bags (we got a bunch of cool stuff!). My name tag came with two stickers: one said Nominee and the other said First Timer. I’ve been a member for ten years but this was my first Reubens Weekend. People see the First Timer tag and introduce themselves. Everybody was really nice. I found some new friends, had lunch and started meeting a bunch of legendary cartoonists thanks to my friend (and MAD legend) Nick Meglin. 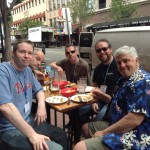 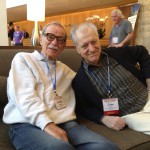 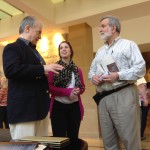 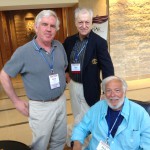 I went to an excellent seminar by Eddie Pittman about his on-line comic Red’s Planet. Gorgeous stuff! At long last, my brother Bill arrived in the afternoon and we went off to get our tuxedos. The ceremony wasn’t until Saturday night though…Friday night was a cocktail party! I was determined to forget about the award but I’d just read this prediction on Hogan’s Alley’s Blog:   “Three nominees with wildly dissimilar styles combine for a tough category. SHOULD WIN: Powell,’s lushly illustrative approach to advertising illustration is as versatile as it is appealing. WILL WIN: Parkes’ cheery, traditional take on product design appeals to the widest cross-section of voters.” I was thrilled to read Tom’s complimentary words but well…you know! 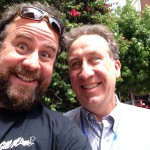 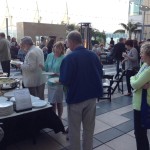 It was a blast, and afterwards we had a karaoke party across the street. Lio artist and double nominee (one for THE Reuben!)  Mark Tatulli  did  The Rainbow Connection with a Kermit puppet and floating butterflies…it was crazy. Mike Lukovich had me in stitches with his “Bust a Move’ performance from Mars.

Saturday was breakfast, the annual business meeting and more seminars. My stomach was turning the whole day dreading the moment when they opened the envelope. My nomination for Advertising/Product Design was shared with Sean Parkes and Cedric Hohnstadt, both great guys. But, of course I wanted to win, it would really help relaunching my line of wildlife stuff under the new brand: Callahan’s Quest for Adventure. I just had to sweat it out. At long last, the afternoon arrived and it was time to get ready. First off was the pre-awards cocktail party: 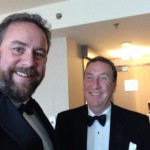 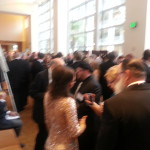 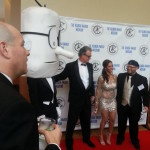 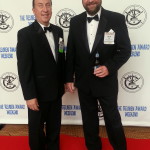 And…into the ballroom for the presentation! It was gorgeous, two screens flaked the stage, a live band was playing and food was already waiting for us. The place was buzzing with excitement.  Tom Richmond (president) announced the Jay Kennedy Scholarship award winner and a hilarious Simpsons film poking fun at us was shown. Then, “Weird Al” Yankovic received the A.C.E. Award (Amateur Cartoonist Extraordinaire); Russ Heath got the Milton Caniff Lifetime Achievement Award; and Bunny Hoest Carpenter and John Reiner (“The Lockhorns”) were presented with the Gold Key (Hall of Fame) Award. 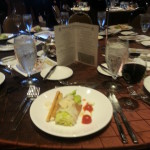 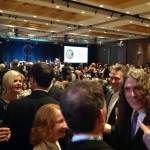 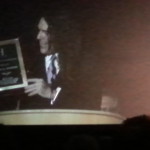 Wierd Al Gets the ACE

The time was drawing near…I was sick. We had a short break and came back to a short film that Gammill put together that was, again, hilarious and then they started with the awards. I was in another world…rewriting an acceptance speech over and over again in my head on the wild shot that I might win. Everything seemed to be happening in double-time! “Speed Bump” creator Dave Coverly won the Newspaper Panel award for the third time. I really like that panel and he’s a great guy. So I was thrilled when it was he who stepped up to present our category. Heart in throat. Panic. Sweat. …”and the winner is…Rich Powell!”

I ran for the stage and climbed the steps. Every though I’d had in my head was long gone, the lights were hot and bright and I was on Auto-Pilot. I remember thanking Frankie, My brother Bill, The Society and The Painkillers I was on when I drew a bunch of these crazy designs. I also tried to rib Nick Meglin but ended up gushing about the guy. I fled. 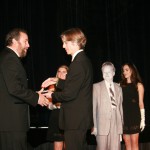 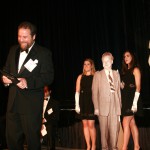 What am I saying? Your guess is as good as mine. 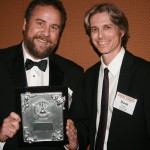 Me and Dave Coverly of Speedbump fame….a fellow winner that night! 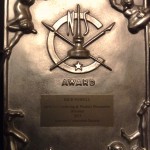 The rest of the night is a blur. There was, of course…another cocktail party!

Sunday Bill and I took it easy. Many cartoonists went to the USS Midway to draw cartoons for the public and many went to the Naval Hospital to entertain the wounded. The NCS has always had a strong bond with the troops. I hadn’t seen Bill for years, so we hung together. We went up to Balboa Park.

Up at Balboa Park

After a relaxing day (and a nap!) we were off to the deck of the USS Midway for another party. We had the whole of the ship to ourselves, had a great band led by the great Editorial Cartoonist Michael Ramirez and good eats. Family’s of wounded warriors joined us and many cartoonists created artwork for them. When we got on board we were handed tickets for a raffle. They were raffling off an IDW Artist’s Edition of MAD. A GORGEOUS book printed at original artwork size and including mark-ups etc. My new friend, Dan McConnell actually said to me “Hey, if I win it…it’s yours”. I figured he was kidding around.

Now….you’re not going to believe this…but there was another cocktail party after this! Bill went to bed. I braved another couple of scotches. It was a nice get-together and I enjoyed chatting with Jeff Keane, Daryl Cagle and other folks although, I was probably somewhat bleary by this point! I was thinking about hitting the sack when who walks in? Dan McConnell! Sporting a huge book under his arm! I was flabbergasted and gushed profusely like a fool. WHat a guy! Here’s the best part: As we’re all looking at the book, Nick Meglin comes up and narrates the whole thing, telling us about the brushes Jack Davis used and generally leaving us pie-eyed.

The perfect Ending to a perfect weekend. Thanks to all the new friends I’ve met and thanks to Jeff Parker for providing photos where I was lacking!